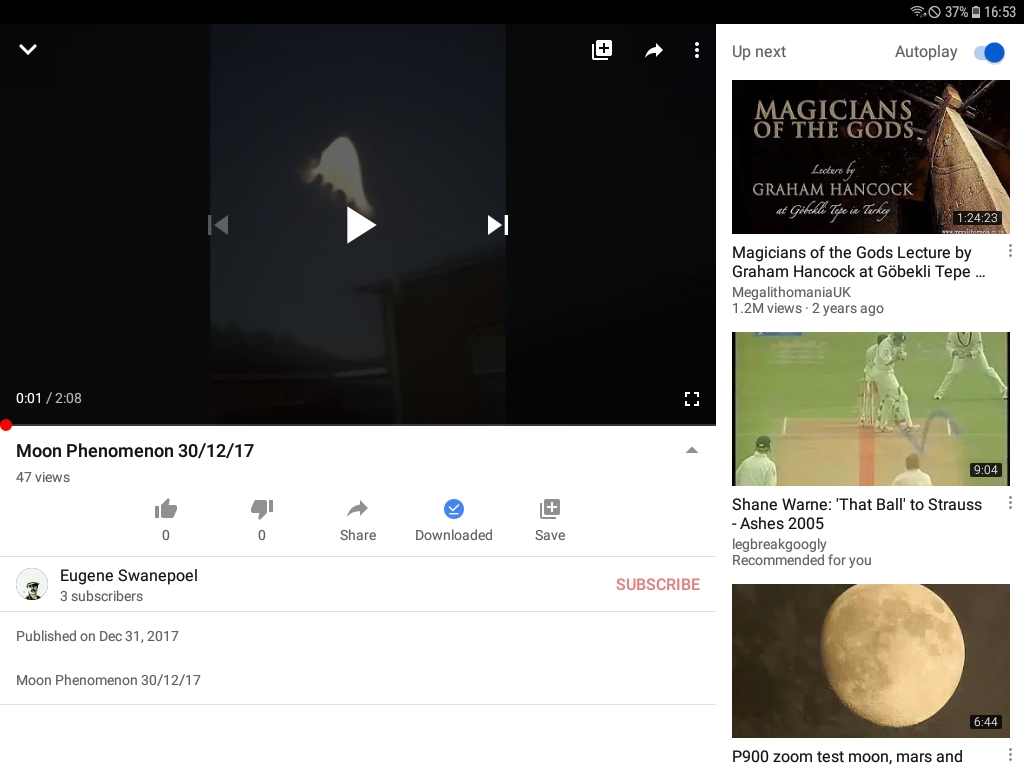 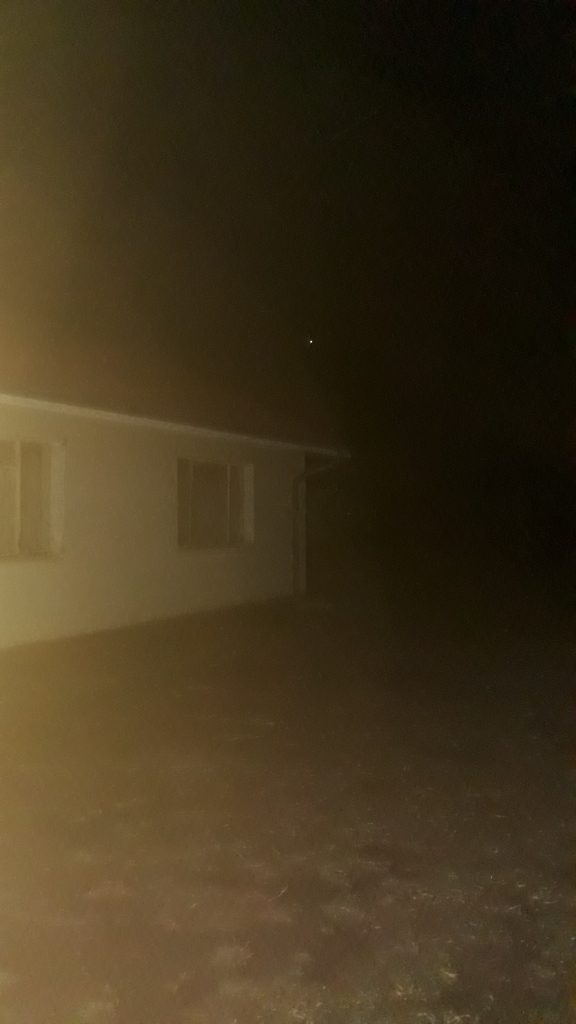 Picture was taken with flashlight of smartphone. Unfortunately the best I got.

Notice that the light is too bright to be a star/ planet.

Just saw something that looked like a star, becoming so bright that it seemed to be something other than a star.
I first noticed it as it was moving which seemed like from East to West.
Thought it could be a bright Venus again, but it suddenly disappeared after it shone so bright, having an orange glow to it as it disappeared.

It totally disappeared at abouth 20:40 (03 Jan 2020) and reappeared a minute or two after that, becoming amazingly bright again.
After a few minutes it brightened up again looking like a stadium light.
Showed it to my wife and daughters.

It continued for which seemed like a half an hour or more, before I went inside.
Not too many clouds in the sky and the moon’s condition was bright.

Also scared me as I have never seen such a thing before.
Please someone explain.

I took a random pic while on a trip to clanwilliam.

I saw one bright light hovering over lansdowne area possibly even a bit further away … all of a sudden a second bright light appeared above it. I did not carry my phone with me and couldn’t see the shape the lights were bright white. 1 of the lights moved down as the other moved slightly to the left … they made movements very quickly. They could have been drones but ..they lid up brighter than stars and street lights …if some one saw the same lights and knows a bit more please inform me as i am curious to know what those bright lights were.

I was lying outside on my back, looking up into the blue sky. I saw something, very very high, what seemed to be much higher than what planes fly – seeing that CT International Airport is just 5 minutes from me and I frequently see planes flying to / from airport.

This was what seemed like a white, round object with some sort of white light / aura. It was moving incredibly fast and it was making a turn in the sky like no plane can do. I have never seen this before, ever.

It came from Western direction, and made a curved turn, moving into the Southern direction. It shifted direction about 90°.

It went so fast, and it disappeared into the blue sky, when my eyes were unable to see it anymore. I saw it for maybe a total of no more than 10 seconds.

This is for sure unusual. I am positive this was an UFO.

I saw a strange light moving east in the night skies between 9:30 and 10:30 at uneven speeds and trajectories on the above mentioned dates in Tulbagh, Western Cape.

My partner and I have been looking up at the night skies since the beginning of this year while house-sitting. On the first mentioned date we saw a light moving over our heads in an eastern direction, moving at uneven speeds and emitting a light of various intensities at uneven intervals (Often a dim flash followed by a slightly brighter flash and then followed by a fairly bright flash)

On the last date we where visiting a friend at her house in the same location and saw a similar light moving slowly in the night sky again between 21:30 and 22:30. This light source again would emit white light by what seemed like random occasion at what seemed like random intensities and seemed to accelerate and slow down very rapidly, on this night a second light source performing similar manoeuvres was also seen and eventually disappeared in to the night sky.

These flying lights, did not have the typical, green, red and white lights of airplanes and seemed to move lower at times than the very common airplanes traffic in the area as well as very far above it, there was no sound being emitted from the light sources as they moved over the night skies. The airplane traffic is typically very audible.

Triangular formation of steady white lights spotted flying just outside of Ottosdal, around midnight. It’s movement gave the appearance of lights fixed to a craft. The three lights remained fixed in relation to each other but moved across the sky into the proximity of what i assumed was a passenger plane and then lost sight of it.

On the 25th of December 2018, around 11pm, I saw the same triangle fly over my location in Ottosdal. It flew directly over from behind. I leaped up and ran a few meters to get the clearest view. was able to track it for a minute before it seemed to turn and i lost sight of the lights. it made no noise and seemed to be flying low and fast.

Coincidently about 15 minutes later I saw what is probably the brightest thing I’d ever seen in the night sky. It was clearly much higher in the sky, and was so bright it looked like it was on fire. much brighter than any star or planet in the sky. It moved for a while and then it was gone. this looked like your typical “shooting star” or something but was moving a bit slower a was much much brighter!

With that said, the triangle craft is unlike anything I’ve ever seen before. https://www.youtube.com/watch?v=DVAWkcRFi1c – This video is the best example of what it looked like, almost exactly the same except my perspective was obviously a lot more steady than the camera’s and it was clearly moving fast. Hoping to find out exactly what it is.

It was around 19:30 on 20 dec in Kluitjieskraal,Wolseley,Western Cape.I was laying in backyard just chilling and watching airplanes flying.When the air was clear I saw two round black objects moving beside each other.One moved very fast forward and the 2nd one followed.They went like this for 2-3 minutes.After a while one just disappeard in mid air and the second one followed.I never put my head down because I really wanted to see what was this.I’ve been waiting my whole life to see a ufo.Unfortunately I couldn’t take a picture or record a video because the two objects was very high up in the air.

Me and 5 other family members witnessed, an intermittent bright light flashing in the night sky across multiple positions at different angles.
The light appeared to be accompanied by a larger dimmer object which it appeared to orbit in a 360 fashion intermittent and random flashes of a bluish white light as well as other brief spouts of colours seemed to appear around the dimmer object, however the secondary and active light object seemed to move spontaneously in precise andcontrolled movements and at considerable speeds, invisible to the eyes until a flash would indicate its new position around the central dimmer object. The objects moved to different locations within our field of view at rapid speeds and continued to flash intermittently during the event which lasted about 7 minutes. In the begining of the event, shortly after my fiance bought the light to mine and the family’s attention, Iquickly ran inside to fetch my military grade torch, and proceeded to run back out and begin flashing it at the craft, the crazy thing is the object appeared to react to the torches light immediately by flashing brighter and flickering for a few split seconds, it appeared as if they were moving closer to us for a few brief moments before disappearing over in a south easterly direction, we continued to watch the area in the sky in which we last saw the object, only to witness a bright stream of bright orange light apearing to leave the atmosphere.
We are in awe and in disbelief of what we all see in the sky tonight, we have some video footage, unfortunately it is of notoriously bad ufo video quality, except for the excitment and genuine disbelief you can hear in all of our voices.